Ronnie & Joey performed at Gilley's Nightclub at the New Frontier Hotel & Casino in Las Vegas on Sunday March 20.
The duo was also featured on KVBC, the Las Vegas NBC affiliate, in conjunction with the performance. The guys wish to thank Peter Banks, the producer of the event  Elyse Del Francia Productions for her help in arranging the Las Vegas debut of the Brooks & Dunn Tribute!

Q: What did you think when Ronnie first proposed the idea of you guys doing a Brooks & Dunn Tribute show?
JOEY : “Ronnie and I are best friends, and we have this chemistry together that made me believe we could do this, and do it justice. We’d just got done busting our rear ends on stage at a honky tonk, and we were winding cables and loading the gear out, just the two of us ‘cause the rest of the band had split, and Ronnie went out to his truck and got this flyer and handed it to me. It had the ‘Borderline’ logo, the steer head, the caption ‘A Tribute To Brooks & Dunn’, and a silhouette of Ronnie & Kix like they were all shadowed so you couldn’t make out their faces but you could tell who they were by Ronnie Dunn’s hair and Kix’s hat…he said ‘That’s us.’ And I said hell yes.”

Q: What do you enjoy most about playing the role of Kix Brooks?
JOEY: “I have always loved to put on a show. From what I know about Kix, that’s one thing I think we have in common – we’ll do anything to entertain the audience, get wild, get loud, get rowdy, jump around like crazy, and love it or hate it it’s gonna get a reaction.”

Q: What’s the toughest aspect of pulling this off?
JOEY: “Waking up the next morning after a show and feeling like you’ve been stomped on by a two-ton bull…this gig is very physically demanding, and while Ronnie’s standing there singing I’m running circles around him, duck walking, boot scootin’, shaking my rear end, dancing with the pretty girls in the audience, throwing my guitar around, singing lead, singing harmony. But I’m not complaining, this show is a dream come true for both of us.”

Q: What’s your favorite all-time Brooks & Dunn song?
JOEY: “Well, I have to pick a Kix song, and there are so many good ones that were never released as singles but are classics nonetheless. But ‘Days Of Thunder’ stands out for me…the way Kix phrases the vocal, the feelings behind the lyrics, the power of the tune itself, and the video because I’m a big NASCAR fan, that song just does it for me.”

Q: Any last words?
JOEY: “I gotta thank Brooks & Dunn for all their hard work, for making so much great music and sticking with it all these years, and I hope they keep going for a long time to come. I was driving down the road the other day and a good-looking girl leaned out the passenger window of the car next to me…she held up a copy of ‘Steers & Stripes’ and yelled ‘Is this you?’ I shook my head and smiled, but in my mind I thought, ‘Only after the sun goes down…”

Here is a few items that were published about a show that I truly enjoyed being a part of....Although it is no longer....,
I introduce you to "Borderline, a Tribute to Brooks and Dunn"

Ronnie Lee & Joey "Kix" Hart take great pride in faithfully performing all the Brooks & Dunn hits, and delivering a quality show that combines this great music with the showmanship, excitement, rowdy honky-tonk style, and - yes, a sense of humor - that have all become B&D trademarks.

Borderline is based in the Nashville, Tennessee area, and is a project that is very close to the hearts of the two guys up front.

Ronnie and Joey have been close friends for several years, playing in bands together and covering a fair share of material from their favorite Country duo. This project became a reality in March 2004, when Hart and Lee made a commitment to make this dream come true. "I'd been wanting to do a Brooks & Dunn Tribute for a long time," confesses Ronnie Lee. "It took me a while to work up the nerve to pitch the idea to Joey - I was afraid he'd think I was crazy!" Luckily, Hart immediately saw this as an opportunity to be a part of something unique and special, while doing what he loves most: singing and performing.

"I always considered it a huge compliment when folks would compare my voice to Ronnie Dunn's," Ronnie continues. "Brooks & Dunn have been my favorite Country act since their first album, and I've bought every album as soon as they were released...I've made it a habit to learn every single they came out with, because it's great music and always felt comfortable for me. Ronnie is one of the best singers ever, and singing his parts is a big challenge, but I sure enjoy it."

Joey is getting a Kick out of playing Kix, emulating the high-energy stage performance that Brooks is well known for. "I've always loved to put on a show", he says. "One night Ronnie and I were working in this club...he was singing "Boot Scootin' Boogie" and I was running around like crazy in this shirt with flames on it, and we both kinda looked at each other and smiled. We decided we'd like to focus on doing this Tribute act, and it's turning out to be more fun than we could've imagined."

Borderline made their live debut on September 4th 2004, headlining the Maury County Fair in Columbia, Tennessee, and has been performing for packed houses in Middle Tennessee, and will make their Las Vegas Debut at Gilley's in the New Frontier Hotel & Casino on Sunday March 20th. 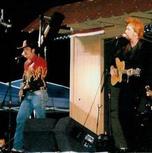 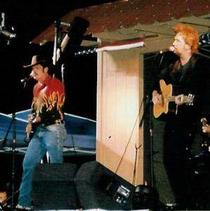 This is a very enjoyable part of my past history. Glad to share it with you......